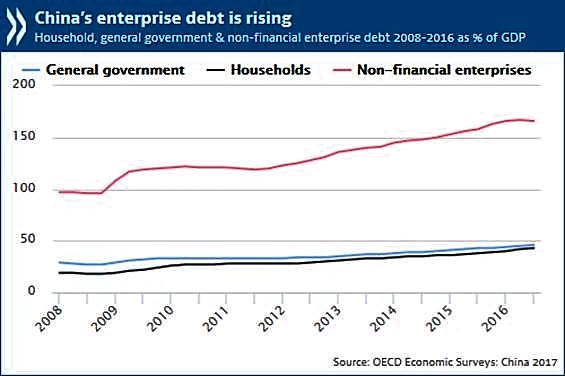 The latest OECD Economic Survey of China projects that the Chinese economy will remain the major driver of global growth for the foreseeable future, with per capita GDP on course to almost double by 2020 from 2010 levels. The Survey recommends continued efforts to rebalance the economy from investment to consumption and to address key risks including high corporate debt, excess industrial capacity and inflated housing prices.

“After decades of breathtaking expansion, the focus should be on making growth more resilient, sustainable and inclusive, and addressing risks to stability,” said OECD Secretary-General Angel Gurría. “China’s economy should now be driven less by physical investment and more by innovation, it should deleverage and it should, above all, become greener.”

Financial risks are mounting on the back of rising enterprise debt and over-capacity in some sectors, as well as real estate price exuberance. Debt owed by non-financial firms in China, encouraged by implicit state guarantees to state-owned enterprises (SOEs) and public entities, reached 170% of GDP in 2016, the highest level among leading economies. Two-thirds of enterprise debt is owed by SOEs. Steps to tackle financial risks should include gradually removing implicit guarantees to SOEs and restricting leveraged investment in asset markets.

The Survey also recommends further structural reforms in line with China’s quest to become a “moderately prosperous society” by 2020.

The tax and transfer system reduces income inequality less than in other leading economies. For example, many low-income households pay a higher share of income in social contributions than richer ones. The Survey suggests basing those contributions on actual income earned, but also broadening the personal income tax base and increasing tax progressivity.

The Survey further recommends that support for research and development, which at present is too concentrated on high-tech industries, be broadened to a wider range of sectors to boost innovation across the economy and maintain sustainable growth. Although China ranks first worldwide in terms of patents, streamlining the incentive system and removing regulatory barriers would boost the impact of innovation on productivity.