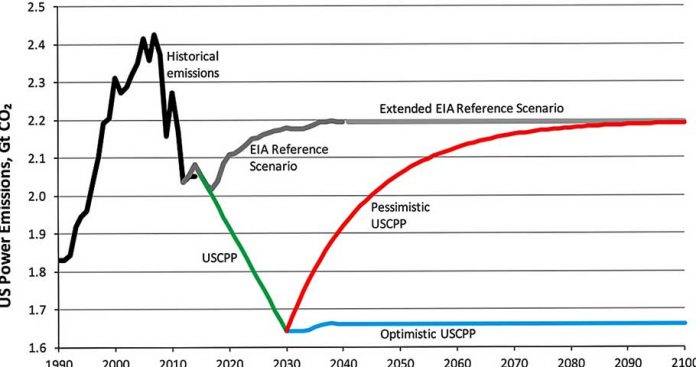 Dr. Lomborg’s peer-reviewed research using U.N. climate models reveals that the Clean Power Plan would only ever have reduced temperature rises by 0.023°F at the end of this century.

“Despite a lot of noise from environmental activists, the Clean Power Plan would have had a trivial effect on climate change and it should not be mourned too much,” said Dr. Lomborg.

“The problem is that the U.S was relying entirely on this policy to meet one-third of its promised carbon cuts under the Paris climate treaty. This was the only real action that the U.S. ever took to fulfil any of the promises that the Obama Administration made in the Paris Treaty.

“In the Paris Treaty, the U.S. promised to cut more CO2 emissions than any country in the world from 2013 to 2025. But like every other reduction promise made under Paris, this was never legally binding.

“Without the Clean Power Plan, there are now no concrete U.S. policies left that will achieve any substantial part of these carbon cut promises,” said Dr. Lomborg.

“President Trump may not have explicitly cancelled U.S. involvement in the Paris Treaty, but he didn’t need to. His actions eviscerate U.S. involvement, and reveal the climate agreement to be toothless. All the promises are just empty words.

“The Paris Treaty was an incredibly expensive set of promises that would do almost nothing to fix climate change. That the Paris Treaty is now unravelling and shown as toothless should not be mourned. The underlying problem is that today’s solar and wind technology is still very inefficient, requiring hundreds of billions in annual subsidies for trivial carbon cuts.

“What the U.S. needs to do instead is focus instead on innovating the price of green energy down below fossil fuels. A huge increase in investment into green energy R&D would be a much more effective response to climate change, and speed up temperature cuts.

“President Trump campaigned on massive increases in infrastructure spending. Especially given the proposed budget cuts to clean energy agencies, it is to be hoped that more money is allocated to energy R&D, which is the real climate solution,” said Dr. Lomborg.